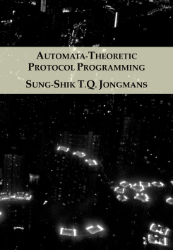 In the early 2000s, hardware manufacturers shifted their attention from manufacturing faster—yet purely sequential—unicore processors to manufacturing slower—yet increasingly parallel—multicore processors. In the wake of this shift, parallel programming became essential for writing scalable programs on general hardware. Conceptually, every parallel program consists of workers, which implement primary units of sequential computation, and protocols, which implement the rules of interaction that workers must abide by. As programmers have been writing sequential code for decades, programming workers poses no new fundamental challenges. What is new—and notoriously difficult—is programming of protocols.

In this thesis, I study an approach to protocol programming where programmers implement their workers in an existing general-purpose language (GPL), while they implement their protocols in a complementary domain-specific language (DSL). DSLs for protocols enable programmers to express interaction among workers at a higher level of abstraction than the level of abstraction supported by today’s GPLs, thereby addressing a number of protocol programming issues with today’s GPLs. In particular, in this thesis, I develop a DSL for protocols based on a theory of formal automata and their languages. The specific automata that I consider, called constraint automata, have transition labels with a richer structure than alphabet symbols in classical automata theory. Exactly these richer transition labels make constraint automata suitable for modeling protocols.

Constraint automata constitute the (denotational) semantics of the DSL presented in this thesis. On top of this semantics, I use two complementary syntaxes: an existing graphical syntax (based on the coordination language Reo) and a novel textual syntax. The main contribution of this thesis, then, consists of a compiler and four of its optimizations, all formalized and proven correct at the semantic level of constraint automata, using bisimulation. In addition to these theoretical contributions, I also present an implementation of the compiler and its optimizations, which supports Java as the complementary GPL, as plugins for Eclipse. Nothing in the theory developed in this thesis depends on Java, though; any language that supports some form of threading and mutual exclusion may serve as a target for compilation. To demonstrate the practical feasibility of the GPL+DSL approach to protocol programming, I study the performance of the implemented compiler and its optimizations through a number of experiments, including the Java version of the NAS Parallel Benchmarks. The experimental results in these benchmarks show that, with all four optimizations in place, compiler-generated protocol code can compete with hand-crafted protocol code.