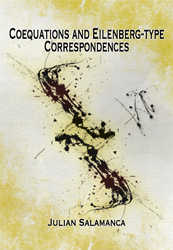 An Eilenberg–type correspondence is a one–to–one correspondence between varieties of algebras and the so–called “varieties of languages”. They have been broadly studied in the literature since Eilenberg’s variety theorem in the 1970s. The concept of a variety of algebras is a well–known concept in universal algebra which, by Birkhoff’s theorem, is the same as a class of algebras satisfying some given equations. However, the concept of a variety of languages is less known and its defining properties have not been fully explained in the literature, they have been ad hoc definitions. The work in this thesis fully explains what varieties of languages are and where their defining properties come from. In fact, varieties of languages are duals of equational theories, that is, coequational theories.

After introducing some basic concepts and fixing the notation, we start by studying two particular structures: deterministic automata and weighted automata. In both cases we show what equations and coequations for these automata are and what it means for an automaton to satisfy them. The concept of a coequation, which is the dual of an equation, is less known in the literature and we fully explain them for the cases of deterministic automata and weighted automata. Additionally, we show duality results between equations and coequations for automata.

In Chapter 5, we provide a categorical version of Birkhoff’s theorem which, for the purpose of this thesis, we state as a one–to–one correspondence between varieties of algebras and equational theories. We introduce the categorical concept of an equational theory, which is a new definition whose main purpose is to explain the concept of a variety of languages used in Eilenberg–type correspondences. We also provide a Birkhoff’s theorem for varieties of finite algebras, for local varieties of algebras and for local varieties of finite algebras.

In Chapter 6, we collect all general background and categorical development of equations, coequations and Birkhoff’s theorem to obtain abstract theorems for Eilenberg–type correspondences. All of this is represented by the slogan

As an application of our general results we show, in Chapter 7, some of the particular instances we can get from our general theorems from Chapter 6. We derive a total of 64 correspondences. To the best of our knowledge, only 20 of them are known in the literature. Most of these known correspondences were proved and published separately in at least 12 different papers. The remaining 44 new correspondences that we show are for varieties and local varieties of algebras, which have been less studied in the literature.