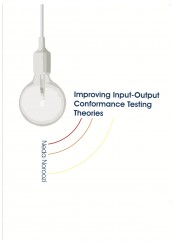 Software quality has become an increasingly important concern in software development, as a consequence of the ever-ascending trend of using software systems in critical systems. Subsequently, testing as a technique for establishing a certain level of software quality has received much attention in the past decades. Model-based testing is a structured approach to testing. Using model-based testing the process of generating test-cases and predicting the correct outcome of test-cases (the so-called oracle problem) can be mechanized. By using rigorous models for system behavior, model-based testing is formalized in terms of a mathematical notion of conformance.