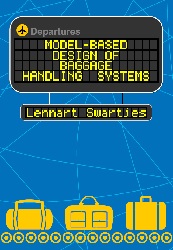 A baggage handling system (BHS) is a key component of an airport. A BHS is responsible for transporting baggage items from designated entry points, e.g., check-ins, to designated exits, e.g., airplanes. To this end, a BHS consists of many kilometers of conveyor belts and specialized components for the routing of baggage items. To control these systems, a supervisory controller is used. Such a controller sends control actions to the actuators, e.g., motors, based on information obtained by sensors, e.g., photo cells.

Due to several different reasons, the design of these supervisory controllers is difficult and lengthy. Using a model-based design approach with early integration may reduce these difficulties and lengthy design cycles. The key idea of this approach is that the (controlled) behavior of the system is captured in a model such that it can be tested before the actual controller is coded and before the actual system is built.

In this thesis, it is investigated how these models can be built in such that the quality and flexibility is increased while the complexity is simultaneously decreased. Methods are introduced to aid the end-user in a process called supervisory controller synthesis; a process in which the controller is automatically synthesized based on a model of the system requirements. Moreover, the traceability between models is investigated when performing model transformations. Finally, the implementation on a real-time platform is investigated and the feasibility of this implementation is shown by performing three industrial-sized cases.

All in all, this thesis provides both modelling considerations while also adding contributions to the usability of model-based design for large industrial systems like BHSs.