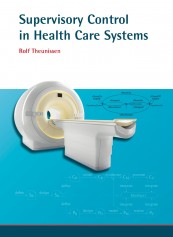 Control systems can be divided into multiple layers: regulative control, supervisory control and user interfacing. Regulative control assures that a system reaches the desired position or the desired state in the desired way. These controllers are typically designed in the continuous-time domain. This is the domain of classical control theory. Supervisory control assures that a system correctly performs its function by determining and executing allowed sequences of tasks on (in)dependent resources. These controllers are typically designed in the discrete-event domain. User interfacing is provided to interact with the users of the system. A user of the system can be a human operator, but also another system. This thesis focuses on the design of controllers for the supervisory control layer.

In the traditional approach to supervisory controller design, behavioral requirements are informally specified by domain experts, and software is coded by software experts. This leads to long development cycles, and to code and requirements that are difficult to develop, debug, maintain, and adapt. Observed erroneous behavior of the system under test can be caused by, among others, ambiguous or inconsistent control requirements, miscommunication between domain engineer and software coder, and errors in the control code. This can be especially problematic when the functionality of existing products evolves over time, such as in the case of Magnetic Resonance Imaging (MRI) scanners, that can be maintained at the level of new, state of the art, systems by periodic upgrades over a period of approximately ten years.

Using supervisory control theory has the following advantages: The engineering process changes from implementing and debugging the control code, to designing and debugging the behavioral requirements. The models of the uncontrolled system and the control requirements are unambiguous, leaving no room for different interpretations. The synthesized supervisors are suitable for code generation, which makes the design relatively independent of the implementation technology. Finally, changes in the control requirements can be realized quickly without introducing errors. As a result, the development time of the supervisors decreases while the quality increases.

Model-based analysis techniques can be used to get early feedback on the system under development. The control requirements can be validated by means of interactive simulation and visualization of the synthesized supervisor together with the plant model. The use of supervisory control synthesis means that changes in the requirements, resulting from these validation steps, can be incorporated in the supervisor quickly.

The generated real-time implementation was extensively tested on an actual patient support system: several operating procedures, that are used in practice, were carried out. In addition, attempts were made to generate erroneous behavior by means of very rapid pressing of buttons and switches, and by intentionally giving illegal commands. In all cases, the control system reacted as desired. The system was also operated and tested by Philips employees, but no errors were found.

In existing ‘extended automata’-based supervisory control, automata are extended with variables, guards and updates. The patient communication system application illustrates how the use of variables is essential for intuitive modeling of various modes of operation of the system. To support systematic, modular specification of the patient communication system for supervisory control synthesis, observers that record sequences of events in terms of states are shown to be essential. An advantage of this approach is that it facilitates state-based output. That is, the definition of the values of output variables as a function of the state of the control system.