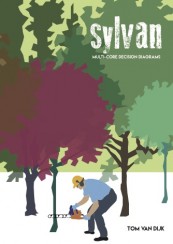 A particular application that extensively uses decision diagrams is symbolic model checking. Model checking studies the properties of models, for example models of software, hardware, communication protocols, automated systems, and properties such as whether a program is correctly implemented, what the failure rate of a system is, how long the average person has to wait for a traffic light, etc. Models typically consist of states and transitions: the system is in a certain state (such as: all lights are red, or: some lights are green) and can transition from one state to another state.

A major challenge in model checking is that the computation time and the amount of memory required to compute interesting properties typically increases exponentially when the size of the models increases, when models are combined, or when we want to check more complex properties. One method to tackle this fundamental challenge is to consider sets of states instead of individual states, and to use Boolean functions represented by binary decision diagrams to encode these sets of states. Hence, symbolic model checking often consists mostly of operations on binary decision diagrams.

In this thesis, we study the design of Sylvan and its two main ingredients, namely the parallel hash tables that store the decision diagram nodes and the operation cache, and the parallel framework Lace that we developed, which executes tasks in parallel using a work-stealing algorithm for load balancing and a novel double-ended queue to store the tasks of each thread. Furthermore, we study how Sylvan performs in two applications: state space exploration and bisimulation minimisation.

We look at state space exploration on a large benchmark set, using the existing model checking toolset LTSmin with Sylvan as a backend. We first only use the parallel operations offered by Sylvan in an otherwise sequential program to obtain a parallel speedup. We then also parallelize the state space exploration algorithm, exploiting a partitioning of the transition relation in LTSmin, and obtain an improved parallel speedup.