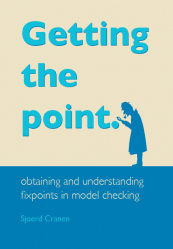 High-tech industry has become heavily reliant on correctly functioning software and logical circuits. A case in point is the automotive industry, where so-called by-wire techniques, implemented as hybrid hardware/software systems, replace and enhance mechanical solutions for steering and braking.

In this thesis, we investigate how model checking techniques based on fixpoint logic can help in analysing these systems, and how these techniques might be improved to make them easier to use.

Using existing technology, we analyse a part of the FlexRay communication protocol, which is used in the automotive industry to provide a communication channel between the various—sometimes safety-critical—parts of a car. A previously unknown error is uncovered by model checking the protocol under various fault models.

We then turn our attention the the process of model checking that was used in the FlexRay case study, and develop theory to address some of the pitfalls we encountered there. We leave the context of our case study, and address the following three issues.