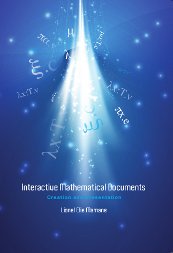 In order to achieve satisfactory integration of formal mathematics into documents, proof assistants themselves have to be adapted:

The proof assistants have by now reached a certain level of maturity and capacity. But they mostly deal only with formal proofs and not with proof explanations.

This dissertation studies the placement of formal mathematics within the more general, not purely mathematical, context of a document, such as a proof explanation, as well as more generally an article, book or course notes that also contain historical, didactic or explanatory remarks, examples of real life applications, acknowledgements of support, etc. Such a document containing (not necessarily exclusively) mathematics is a mathematical document.

From our consideration of mathematics done in a proof assistant, thus on a computer, it follows naturally that we consider documents that are digital. As the document is digital, it can be interactive, that is it not only presents static information in a static design to the user, but also reacts to the user’s actions. This work treats specifically the interaction with the formal mathematical parts of the document; that is it treats interactive mathematical documents.

While my implementation work was primarily done with the Coq proof assistant, and a significant part of the work lied in dealing with specifics of Coq, the general principles of my work are not intimately linked to details of the design of the theoretical underpinnings of Coq. My work can thus in principle be adapted to other proof assistants.