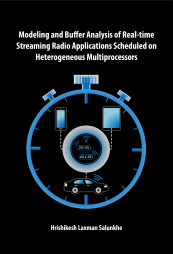 Current multi-functional embedded systems such as smartphones and tablets support multiple 2G/3G/4G radio standards including Long Term Evolution (LTE) and LTE-Advanced running simultaneously. The transceivers of these applications are real-time streaming applications since they have real-time requirements, and run continuously, processing virtually infinite input sequences in an iterative manner. They are typically scheduled on a heterogeneous multiprocessor to satisfy real-time and low-power requirements. The timing and resource usage analysis of such applications, when mapped to a hardware platform, is crucial to guarantee their correct functional behavior. The dataflow model of computation fits well with this application domain, and several static variants offer design-time timing and resource usage analysis.

In dataflow, applications are modeled as graphs that consist of nodes called actors and edges. These actors, when modeled on a hardware platform, communicate with each other by producing (and consuming) data values called tokens through finite First-In First-Out (FIFO) buffers which are mapped on a on-chip memory. Buffer allocation for such applications involve the minimization of total memory consumption by buffers while reserving sufficient space for each token production without overwriting any live (i.e. not consumed) tokens and guaranteeing the satisfaction of real-time constraints. Systems may prevent overwriting of live tokens by implementing a back-pressure mechanism in which a producer task is suspended until there is a sufficient space available on its output buffers. In systems without back-pressure, a producer can execute without checking for the availability of space on its output buffers, resulting in buffer overflow. Such systems are not uncommon, since back-pressure incurs extra processing and synchronization overheads. We propose dataflow-based modeling and buffer allocation techniques for real-time streaming radio applications scheduled on heterogeneous multiprocessors without back-pressure. Our contributions are:

Static dataflow allows a rich set of analysis techniques, but is too restrictive to conveniently model the dynamic data-dependent behavior in many realistic applications. Dynamic dataflow allows more accurate modeling of such applications, but in general does not support rigorous real-time analysis. Mode-controlled Dataflow (MCDF) is a restricted form of dynamic dataflow that promises to capture realistic features in such dynamic applications and allows rigorous timing analysis. We show that MCDF can conveniently handle the dynamic behavior exhibited by such complex industrial applications. We investigate the challenges involved in dataflow-based modeling of LTE and LTE-Advanced receivers. We develop modeling techniques that address these challenges one by one, and stepwise develop a complete and fine-grained MCDF models of an LTE and LTE-Advanced receivers.